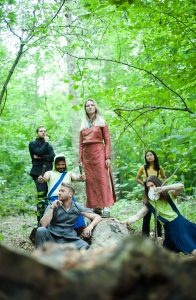 The forest of Arden, once home to squirrels, badgers, and the occasional bear, has with the rise of the evil new Duke become a refuge for outcasts. Banished for being the daughter of the good old Duke, Rosalind finds herself there all alone – that is, except for her best friend, one or two hearty jesters, a melancholy lord, a handsome yet inexperienced young man, his vindictive older brother, and a surprising collection of foresters. Through all this she must make her way, disguised for safety as an ordinary wanderer, to find her fortune and whoever it is who has been scrawling her name into the trees.

English Theatre Leipzig presents Arden, a light adaptation of As You Like It with updates for a modern audience, of which we are (almost) certain Will Shakespeare would approve.

Cast (in order of appearance)

Leon Keim as Oliver, a vindictive lord / the wrestler

Emre Atay as Orlando, his brother

Pablo Franchini as Touchstone, a jester

Junyu Li as a forester with a violin

Crew (also in an order of appearance)

SCAB. A Comic Drama in Two Acts by Sheila Callaghan

Anima has plunged into a spiral of self-destruction and is lying on the floor in the “throes of a massive emotional calamity” when her new flatmate comes barrelling in. Christa is perky and self-absorbed, wracked with insecurities. Yet thanks to a set of slightly surreal circumstances, an intense, disturbing friendship quickly ensues under the watchful gaze of a malevolent statue and a dying houseplant.

Scab was first performed at the Women’s Expressive Theatre in New York City twenty years ago.